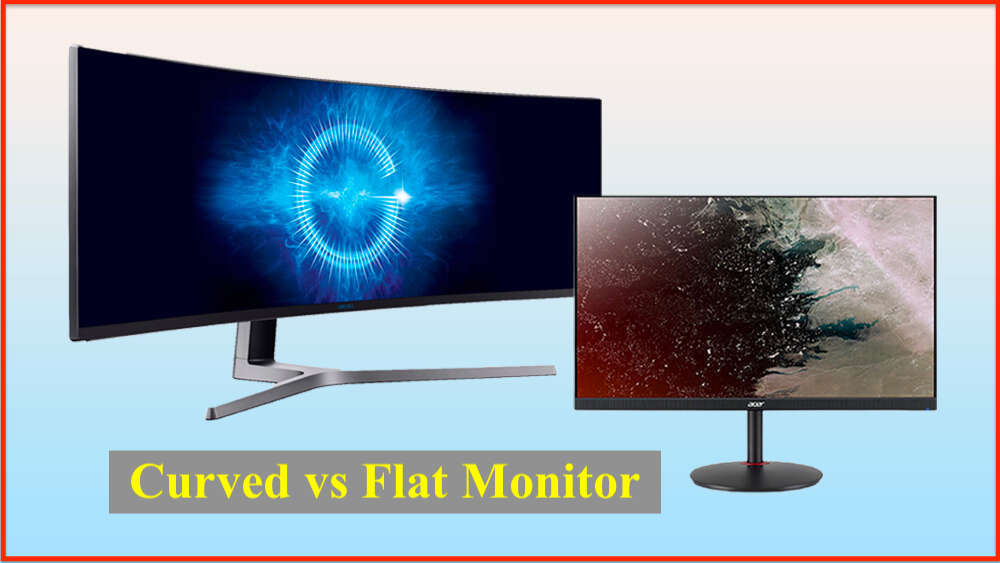 Curved monitors have grown in popularity among gamers and enthusiasts alike in recent years. As a result, many are asking, “What is the difference between curved and flat monitors for gaming?”

For this reason alone, we felt it would be a great idea to look at some of the differences between curved and flat monitors in more depth. We’ll look at which one is best for gaming, entertainment, workflows, and everyday usage. 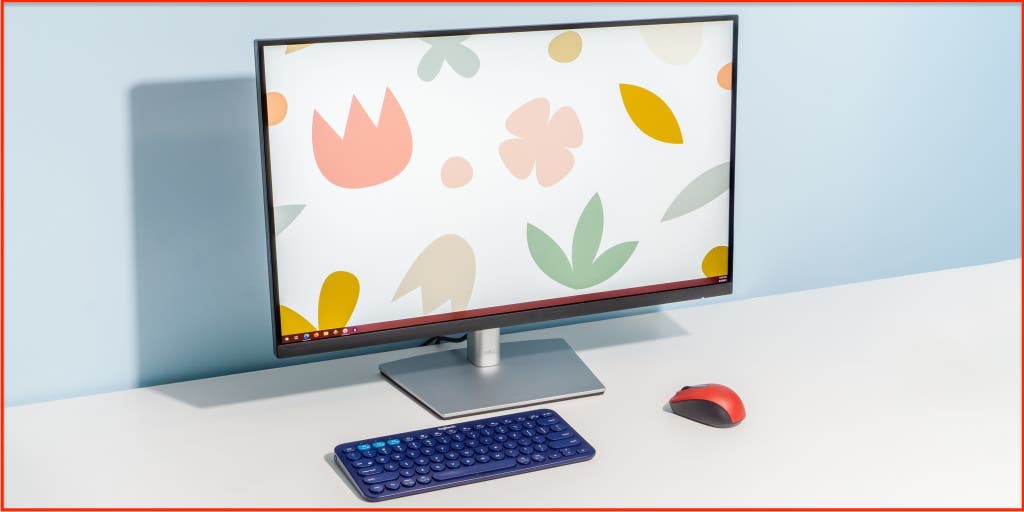 Flat monitors have been a mainstay of the computer sector for decades, since they were the first monitors to enter the market, making them the most popular and for good reason. Flat monitors, unlike their curved counterparts, offer several advantages that may make them a better choice for you. Because flat monitors are ideal for gaming, they typically have better performance characteristics, such as faster refresh rates, reaction times, and color accuracy.

Furthermore, because of their long history in the business, there are a plethora of flat gaming monitors on the market that can accommodate a wide range of requirements, including price, performance, and capabilities. And, as a result of these technological advances, different flat kinds of monitors, such as ultrawide, have emerged; these monitors are available in both flat and curved versions. However, in this part, we will only discuss the flat ultrawide variants.

And if you had to pick a monitor just for performance, we believe this is the best choice; what sets these monitors apart from others is their unique screen proportion rates, which use a 21:9 aspect ratio rather than the standard 16:9. As a result, it provides 33% more horizontal screen real estate than normal 16:9, and its extra wide-angle view is ideal for those who don’t want to use several monitors but still want a large field of vision and gaming.

What To Look For When Choosing A Flat Monitor

Resolution: This is the first aspect to pay close attention to when it comes to ultrawide monitors, we recommend a resolution of 3440×1440 or greater. As we’ve observed, text on these monitors becomes jagged and difficult to read if the resolution goes below 2560x 1080. As a result, you may utilize a monitor that is readily recognizable and pleasant to watch.

Size: This is a personal preference; however, most ultrawide monitors are 34 or 35 inches, but if you want a smaller flat monitor, you can choose from 34, 27, and 24 inches in terms of ultra-wide; we found that going below 34 inches is not ideal because it does not provide a strong justification for the price, but these options are available if you choose to do so.

Color Accuracy:  The makers of many monitors calibrate them for color accuracy. Some may not be, while others may not be aware of how to calibrate their monitors.  If you don’t want to go to the trouble of finding the best picture quality monitor, utilize (sRGB color gamut) as much as possible; the larger the gamut coverage on a monitor, the better. The greater the spectrum of hues that can be properly represented, the better.

Flat Monitors Have Their Benefits

The primary benefit of a flat ultrawide monitor is that it allows you to see more clearly. Having a broader field of vision means having more peripheral vision, which may be a big help while playing competitive multiplayer games.

Flat monitors, on the whole, are superior for gaming, with faster refresh rates, reaction times, and color fidelity. Flat ultrawide displays will allow you to multitask more effectively in daily activities, particularly if you have several windows open. It’s a fantastic alternative to a dual monitor since it frees up a lot of desktop space.

But Flat Monitors also have flaws

Unfortunately, flat ultra-wide monitors have certain drawbacks; not every game supports the 21:9 aspect ratio. Since technology advances, this will become less of an issue as certain apps may not cover the whole screen, leaving the outer edges unusable.

Furthermore, the larger aspect ratio of these monitors may affect your performance, particularly if you have a poor GPU; thus, before buying an ultra-wide monitor, make sure your GPU can completely handle it.

There are no significant drawbacks to using an ultrawide monitor in daily applications. The one exception is that flat ultrawide monitors are much more costly than standard monitors, so be sure you need one. 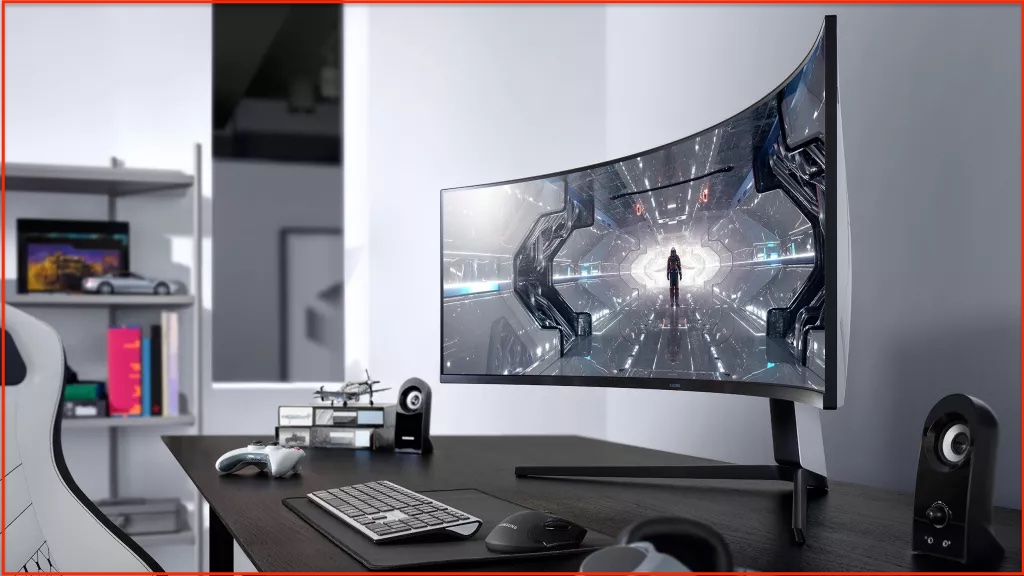 Curved monitors were introduced to the market approximately 5 years ago, but they have only lately begun to acquire widespread popularity, raising the issue of whether they are a better choice than flat monitors. Aside from the apparent curvature, there isn’t much physical difference between curved monitors and flat monitors.

The curvature of these monitors is measured in millimeters, and “r” stands for their curvature radius. 1800r, 3000r, and 4000r are the three most frequent curved measures. And the lower the number, the more curvature there is inside the monitor; for example, a 1800r monitor has more curvature than a 4000r monitor.

The world, as we can see, is three-dimensional, with length, height, and breadth, and curved monitors make use of all three-dimensional perspectives. As a result, they expand on peripheral views, giving players a more immersive gaming experience.

Curved monitors can help to reduce eye strain. Of course, some high-end flat monitors have technologies like blue light filters, which have been proven to have a detrimental effect on patterning. A curved monitor, on the other hand, keeps the picture close to your eyes, requiring less effort to adapt to the visuals.

Curved Monitors has a few Drawbacks too

The pricing is first and foremost, as these monitors are among the most expensive on the market. As with any other monitor, the larger the screen size you purchase, the higher the price increases, and if your monitors are equipped with higher-than-standard upgrades and components, things can quickly escalate into the four-figure range.

Another significant disadvantage of curved monitors is that their overall gaming performance is often worse than flat monitors in terms of refresh rate and reaction time, even though flat monitors are still much less expensive. So, if you’re searching for the best performance, a flat-screen monitor will be a better choice.

If you’re going to get a curved monitor, as previously said, go for a bigger size since the curvature benefits decrease with lower sizes. Furthermore, the straight angles on these monitors are off-center owing to their curved nature; as a result, if you’re a designer who works with straight lines, the curvature will make your lines less than precise.

That concludes our definitive guide on curved versus flat monitors. We’ve attempted to be as comprehensive as possible in this comparison in order to make your buying choice that much simpler. In the end, both flat and curved monitors have their own set of advantages and disadvantages, making them ideally tailored to certain situations. So to lay it on the table,  It all falls down to personal taste and requirements.

What Are The Pros And Cons Of A High Volume Merchant Account?

How to find cheap and reliable unlimited reseller hosting for your business?