Home » IPS vs. TN vs. VA vs. OLED vs. Quantum Dot Explained
Knowledge Base

IPS vs. TN vs. VA vs. OLED vs. Quantum Dot Explained 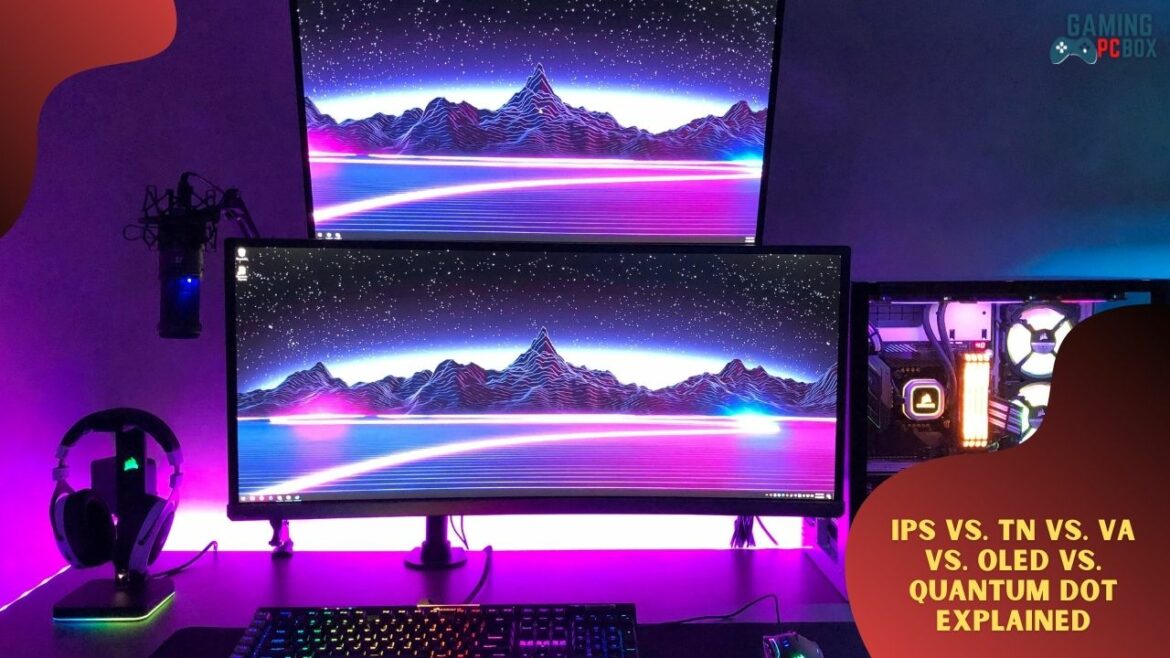 You’ve come to the correct site if you want to learn more about monitor kinds. We’ve covered every sort of panel here, along with all the details you’ll need.

From IPS to TN to VA to OLED to Quantum Dot, you’ll find all you need to know about. Take the time to read all the way to the end to ensure you know what to do if you ever need a display.

When purchasing a new monitor, many consumers focus solely on the display’s resolution and size. However, keep in mind that while a display’s size and resolution are critical, so is the display technology.

This is due to the fact that display technology aids in our understanding of latency, viewing angles, color accuracy, and other factors.

Let’s dive right into it.

IPS vs. TN vs. VA vs. OLED vs. Quantum Dot Explained The LCD takes the first and most common display position, and almost everyone is acquainted with it.

LCDs made an immediate impression on the market and rapidly became popular.

Unlike CRTs, which employ vacuum tubes, electron guns, and phosphorescent screens to generate pictures, LCDs use liquid crystals to alter the color of light to get the required hue.

These crystals are backlit with some form of illumination, such as LEDs, to produce an image.

LCD displays are commonly referred to as “flat screens” because of their flat and light appearance, as opposed to CRT monitors, which were large and heavy.

LCDs are made easier to use by a variety of technologies. The most popular types are TN (Twisted Nematic), IPS (In-Plane Switching), and VA (Vertical Alignment).

Let’s have a look at all of them right now.

To begin with, TN, or Twisted Nematic, is among the most common LCD display types.

TN displays are popular because they are cheap and often regarded as “quick,” meaning they respond quickly and have little input lag.

TN displays are appealing because of their inexpensive cost and short latency, but they have drawbacks such as poor viewing angles and color fidelity. A TN panel can only be identified by looking at it from a different angle, either vertically or horizontally.

Based on the nature of the TN panel, the colors may be somewhat off or completely obscured.

To compare TN vs. IPS vs. VA, the former has the advantage in terms of reaction time, which is faster, while the latter has the disadvantage of low color accuracy and viewing angles that cause the color and display to leak. IPS displays are the most costly and have a lot of latency and slower reaction times, while having perfect color reproduction and viewing angles.

As a consequence of the greater latency, which can induce ghosting and motion blurring, video game players have traditionally avoided these displays.

However, new technologies like S-IPS (Super-IPS) have significantly reduced the lag and response speed of these screens, making them far more suited for gameplay than they were before.

As a consequence of numerous firms producing low-cost IPS displays that use IPS panels that were previously QA rejected by companies that sell IPS displays at a premium to professionals, IPS displays have become substantially cheaper in recent decades.

As a result, IPS displays are now far less costly than before, but they still have some slight drawbacks.

Let’s see how IPS screens stack up against the other options.

IPS vs. TN: Which is Better?

While IPS has a small picture quality and viewing angle advantage, the quicker reaction time is a deal-breaker.

TN screens, on the other hand, are quicker and have a better reaction speed.

IPS vs. VA: IPS. IPS has a slight advantage in terms of color reproduction, but this is dependent on the panel and viewing angles.

Different IPS panels may have a slightly slower reaction time, and this is where VA outperforms IPS.

As you can see, each form of the display has strengths and weaknesses. VA displays, or vertical alignment displays, are the latest form of LCD. These displays are in the middle of the TN and IPS ranges, mixing them all out.

VA screens are less costly than IPS panels, yet they give excellent viewing angles and color fidelity. Even so, they fall short of IPS displays in terms of quality. That’s why most experts choose IPS displays.

The greatest issue with VA panels, like IPS panels, is that they have a lot of latency, which can cause computer ghosting and a horrible gameplay experience.

VA screens are a great option for people who want totally true colors, a crisp image, and improved viewing angles but don’t want to spend the money on a full-fledged IPS monitor.

To compare VA panels with the other panels:-

VA vs. TN: While TN has a faster response time, VA has considerably better color fidelity and viewing angles, making it marginally superior for gaming.

Now let’s compare VA and IPS: When compared to IPS, VA has less color fidelity, but similar viewing angles. The panel’s reaction time might be faster or slower. It all depends on the panel. Now that you know everything there is to know about LCDs, it’s time to discuss Quantum Dots.

Quantum Dot, as seen on today’s screens, is a distinct technique of backlighting that increases color and consistency, rather than an LCD display technology.

Because it is impossible to cover LEDs accurately and produce a perfect uniform light output, Quantum Dots are far superior to LEDs. They may also be modified separately for the optimum white light output. OLED screens take advantage of cutting-edge display technology. This technology allows each OLED pixel to generate its own light, removing the need for backlighting, which is required by LCDs.

This allows each pixel in an OLED display to be turned out completely, enabling the display to exhibit totally dark blacks, which is difficult with an LCD because the backlight is still on but the display is displaying a pure dark picture.

On the market, OLED monitors are relatively scarce, with the majority of them being found in laptops and smartphones. As a result, nothing is known about the operation of a commercial OLED monitor.

OLED TVs, like previous plasma TVs, have been known to “burn-in” images. Nevertheless, as more OLED screens become accessible, this problem may be resolved in the future.

In the future, OLED displays, including IPS and VA displays are expected to offer good color reproduction and viewing angles, but they may have latency issues.

TN vs. IPS vs. VA Conclusions

The display war has now finally come to an end. As previously said, no panel is flawless. Each has its own pros and cons.

It’s also critical to select a display that corresponds to the type of job you do. Gamers, for example, will want a quick monitor with reduced response times, so they’ll opt for a TN or VA display with low latency and a high refresh rate, whereas creative professionals, such as graphic designers, artists, video makers, photographers, and others, will opt for an IPS or VA display with the widest color gamut and best color accuracy. When it comes to general work, any panel type will serve. There is currently no technology on the market that is superior to any of the others.

Heart of PointClickCare: A Year in Review