Home » Underclocking And Undervolting the GPU – Is it Safe?
Graphics CardKnowledge Base

Underclocking And Undervolting the GPU – Is it Safe? 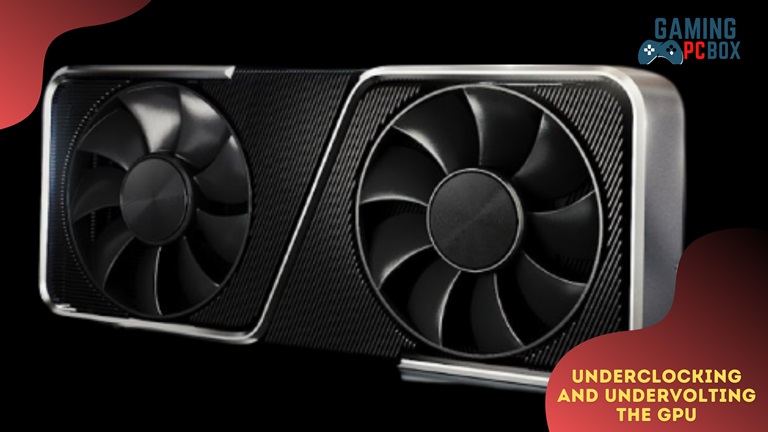 We are pretty sure that you must have heard of something called as Underclocking and Undervolting. But what is it exactly? And is it even safe?

Let’s dive right into it!

Underclocking And Undervolting the GPU – Is it Safe?

Undervolting is the mechanism of progressively lowering the voltage of computer processors and devices through activity. Dynamic voltage scaling conserves electrical voltage in this cycle, lowering energy consumption and reducing heat production by computing components.

Undervolting is used in devices like laptops and mobile phones that have a limited electrical supply and are powered by a battery.

Undervolting is usually managed with the support of software-based power control utilities. Moreover, such utilities are often included by default in most operating systems.

BENEFITS OF UNDERVOLTING THE GPU

Thermal throttling is harmful to your computer; however, undervolting will help you prevent it. Undervolting your GPU reduces the amount of heat generated by your device, reducing the amount of work required by the fans. It will keep the system’s temperature constant.

As previously stated, even during high-intensity activities such as heavy gaming or multitasking, undervolting has no signiﬁcant inﬂuence on PC performance.

So does that mean Undervolting increases battery life?

Undervolting the GPU is particularly useful for devices that run on batteries, such as laptops. According to our experience, undervolting will result in a 20% boost in battery capacity, which translates to around an extra 20 minutes of battery life for a laptop that normally lasts 3 hours. This is another benefit of undervolting GPU.

IS UNDERVOLTING GOOD FOR GAMING?

Undervolting refers to keeping the voltages supplied to the device constant to reduce the temperature and heat generated by computer components.

The most important thing you can do to get a great gaming experience is to keep your device refreshed. This will allow you to play intense games without interruption.

You will now see how Undervolting will help you have a better gaming experience. In addition, underclocking your GPU lowers your FPS.

HOW TO UNDERVOLT YOUR GPU

*Note that Undervolting your GPU beyond the specifications of manufacture might lead to your system damage. So be careful about that!*

Just be careful with whatever you choose to do. So, the first method is specially designed for the Intel system running windows and works amazingly-

Step 1: Launch the app and you’ll be greeted with a splash screen. The first step is to switch on core voltage control. To make the core to voltage monitoring, go to the “monitoring” segment in the top right corner, then to the system configuration.

Step 03: Choose the ”advance tuning” option from the left menu. Take a snapshot or write down the default core voltage using the snipping device.

Step 04: Dragging the mouse over the core voltage offset and lowering the voltages > then clicking add. Reduce voltage in 0.020v (-0.020v) steps, but keep reducing voltage by 0.005v (-0.005v) before the device becomes unstable or fails.

To make sure there aren’t any problems, we suggest “running.”

Step 01: Use the MSI afterburner app after you’ve finished the download.

Step 02: Let’s take a look at the image below and get a better understanding of how the app works.

Step 03: Make sure the graphics cards are recognized before making any changes.

Step 04: Using your desired modification settings, lower the ”Core Clock (MHz)” meter, which is located in the middle.

Step 06: Select the profile slot number to save the change you’ve made.

Undervolting the CPU reduces the amount of power supplied to the CPU, resulting in lower heat, longer battery life, and a shorter time for the fans to come in.

We hope you understood this process clearly, if you still feel that you need more help, do watch a video related to the same.

Clock speed refers to the number of cycles that can be completed in a second. The higher the clock cycle, the more instructions the GPU or CPU will execute in a single second.

By which the speed at which the graphics processor runs, overclocking a GPU improves the system’s performance.

Overclocking the CPU will shorten its lifetime. It’s a lot simpler to claim that it’s a more intense program. That is why Intel has a stringent “no overclocking” policy when it comes to product warranty protection.

Most people believe that overclocking is harmless as long as the processor core voltage is not increased, but this is not the case. Frequency increases caused by overclocking the GPU result in higher load temperatures, which reduces the GPU’s useful life, hence it is necessary that you carry out overclocking after you have considered all the risks.

HOW TO OVERCLOCK THE GPU?

Step 1: Download and install the MSI afterburner program, and then run it.

Step 02: Now is the time to learn how to use this software. Let us just take a look at the picture.

Step 3: First, you must install and download another program called ”UNIGiNE Heaven.” The aim of downloading this program is to conduct a stress test.

Step 05: Select the “benchmark” button in the upper left corner of the window to begin the benchmarking process.

It now leads to the initiation of a sequence of tests. The temperature, frames, graphics clock, and memory clock will all be measured during the test. Keep the test running; it will only take a few minutes to finish, but keep one thing in mind. Keep an eye on the stats at the top of the screen during the test.

During the test, your GPU can hit a certain temperature and stay there throughout the time of the test. This will give you an indication of how much scope for overclocking you have.

You’ll get a score and average FPS stats from the test. we suggest that you save that information for later use if necessary.

After a few seconds, restart your computer, and make sure you’ve bookmarked this page so you can return to it later.

Once you’ve completed the preceding steps, you’ll be urged to restart your computer. Open MSI Afterburner and Unigine Heaven again after restarting your computer.

Step 09: Open MSI Afterburner and drag the core clock slider to the right until it reaches +23 > then press the ”Tick (ü)” icon.

Step 10: Go to Unigine Heaven and press the benchmark button to begin the test; wait for all 26 scenes to be completed. You can observe that your ranking has improved marginally from the last time you took it.

Let’s look at how you can maximize the output of your graphics card by overclocking it.

Step 11: Return to the MSI afterburner and raise the clock speed to 30 from 20.

Step 12: Go to Unigine Heaven and press the benchmark button to begin the exam, then wait for the 26 scenes to finish.

If the computer still doesn’t malfunction and you can’t see any graphical crashes, go back to Step #1 and repeat.

Don’t worry if the machine crashes after you’ve completed the steps. Reduce the clock speed by 30 percent using the MSI afterburner.

If you’ve done overclocking, go to MSI Afterburner and press the “Save” tab, then assign a number to that slot to save your settings.

If you experience graphical glitches or your game crashes, it’s possible that your overclocked settings are causing the problem. Simply go to the MSI afterburner and press the reset button to return to the default settings. It’s that simple!

Just be sure to consider the risks while doing all this.

Since lower output does not produce as much heat inside the system, underclocking aids in reducing unnecessary heat accumulation. Underclocking reduces the amount of energy used to keep the machine running. Underclocking settings are common on laptop computers, which is why batteries work longer without being charged.

HOW TO UNDERCLOCK GPU AMD?

You can underclock Your AMD and NVIDIA GPU with MSI Afterburner. To underclock PC, you have to follow the step below.

Step 1: Download and install MSI Afterburner > run the app after it has finished installing.

Step 02: Before making any changes, double-check that your graphics card is identified.

Step 03: Using your desired modification settings, lower the Core Clock (MHz) meter, which is located in the middle.

Step 05: Now is the time to save the modifications you’ve made. Tap on the slot number to retain the change.

Step 06: When you’re done underclocking, go to MSI Afterburner and press the “Save” button.

And you are done!

So this was how all about Underclocking and Undervolting the GPU and if it Is Safe?

To conclude this article,

Underclocking the GPU can result in reduced power consumption because the lower clock speed of the GPU causes the hardware to operate at the bare minimum speed.

Underclocking and undervolting both help to keep the machine cooler, and when the temperature is lower, the fan makes less noise.

Not everyone requires a GPU that is overclocked. Many people only use a small portion of the memory available on their graphics card.

We hope you enjoyed reading this and found it helpful!

That was all from our side!

Please leave your valuable suggestions, feedback, and comments in the section below.