Home » What Is HDR? HDR vs. SDR Compared
Knowledge Base 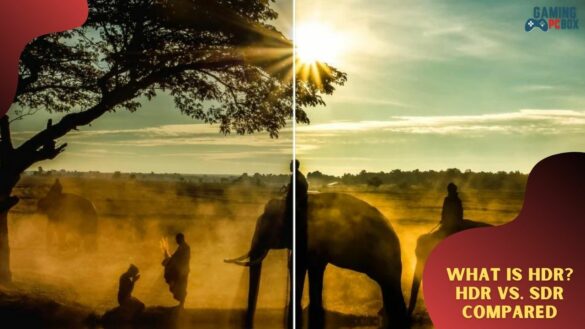 If you don’t know anything about HDR or SDR then you are in the correct place!

By the end of this article, you’ll learn everything about it. Please continue reading to know more about HDR, or high dynamic range photography.

The next generation of color clarity is High Dynamic Range (HDR). In pictures and videos, it conveys reality. HDR maintains visual sharpness better than Standard Dynamic Range (SDR). It’s perfect for anything that requires a lot of contrast, shadows, and mixed light.

The suffix “high” is used in a variety of phrases, such as “high definition,” “high security,” and “high speed.” So, what exactly is ‘high’? The term “high” simply means “to the next level.”

So same may be said about High Dynamic Range photography (HDR). This entails a higher or greater dynamic range. HDR has grown in popularity in recent years, surpassing the normal dynamic range of SDR.

Unfortunately, because HDR is still a relatively new technology, many people are unfamiliar with how it works. But, assuming you’ve heard of High Dynamic Range (HDR) and how it may take your viewing experience “to the next level,” let’s define HDR.

To help you answer these lingering questions, we’ve put up an HDR vs. SDR comparison chart. Read on to learn more about how HDR works and why it’s so desirable.

HDR photography is a type of photography that captures, processes, and copies images in such a way that both the darkness and highlights of a scene have more detail. Although HDR was originally solely employed in traditional photography, it has lately made its way into smartphones, televisions, monitors, and other digital equipment.

So what is this going to change?

The dynamic range of a picture, also known as its brightness, is the amount of information contained between the image’s brightest and darkest points. A photograph with a high dynamic range contains both dark and bright elements in the same frame. Images of sunrises and sunsets have a wide dynamic range.

Dynamic Range on Your Monitor

Hues and information in an image are frequently “clipped” as a result of the monitor’s display capabilities, which is usually due to a low contrast ratio or the monitor’s inability to operate with HDR. As previously stated, all trimmed information is destroyed and hence cannot be displayed. When a monitor attempts to create an image with a broad spectrum of brightness, the problem gets even more complicated.

HDR solves this problem by calculating the amount of light in a scene and using that information to preserve details inside the image, including situations with substantial brightness variations. This is done in the hopes of creating more realistic-looking images.

The current video and movie projection standard is SDR or Standard Dynamic Range. Regrettably, it can only constitute a tiny portion of the dynamic spectrum that HDR can handle.

As an outcome, HDR preserves details in settings where the contrast ratio of the display might otherwise be a hindrance. SDR, on the other hand, is lacking in this area.

By comparing HDR vs. SDR, HDR allows you to see greater clarity and color in settings with a wide dynamic range. The intrinsic measurement is another difference between the two.

For those unfamiliar with photography, dynamic range is measured in stops, comparable to the aperture of a camera. This indicates the image’s gamma and bit depth changes, and it varies depending on whether HDR or SDR was utilized.

To begin, photos on a typical SDR display would have a dynamic range of about 6 stops. HDR information, but on the other side, has the potential to almost triple this dynamic range, with a total of 17.6 stops.

As a consequence, dark grey tones in a gloomy picture may be trimmed to black, while specific colors and details in a brighter scene might be trimmed to whiteness.

When it comes to HDR, there are two widely used standards today: Dolby Vision and HDR10. Here, we’ll go through the distinctions between each of them.

HDR10 has established itself as one of the standards for 4K UHD Blu-ray discs, with Sony and Microsoft using it in their respective PlayStation 4 and Xbox One S consoles. Whenever it comes to computer monitors, the ViewSonic VP Professional Monitor Series has HDR10 compatibility in select versions.

Producers are utilizing HDR10 to dodge having to comply with Dolby’s specs and costs. HDR10, for instance, is capable of mastering footage at 1000 nits of brightness and uses 10-bit color.

Dolby Vision is an HDR standard that requires screens to include a Dolby Vision hardware chip, for which Dolby gets licensing fees. Dolby Vision uses 12-bit color and a maximum brightness of 10,000 nits. It is also essential to mention that Dolby Vision’s color spectrum and brightness range exceed those of today’s displays. Moreover, because of the robust deployment of Dolby Vision, there is a restriction for monitor makers to participate due to its unique hardware service criteria.

It’s a simple error to make if you have an HDR television. You’ll get the impression that all of the stuff is HDR. This isn’t the case; not all content is generated in the same way! Here’s an explanation to clear things up: If you have a 4K television, you won’t be able to make use of the 4K details except if the material you’re watching is likewise 4K. The same is true with HDR; to appreciate it, you must first ensure that your viewing material enables such an approach.

HDR material is accessible in several formats right now. In terms of streaming, Netflix has adopted HDR on Windows 10, and Amazon Prime has followed suit. In terms of actual material, HDR Blu-ray discs and players, as well as the built-in players on the Sony PlayStation 4 and Microsoft Xbox One S gaming consoles, are purchasable.

Is your setup capable of displaying HDR?

Once you’ve decided on your HDR material, whether it’s an HDR movie or an HDR game, you’ll have to make sure that your system can handle it.

The first step is to make sure your graphics card supports HDR.

On HDMI 2.0 and DisplayPort 1.3 devices, HDR may be displayed. HDR material should be viewable if your GPU offers one of these ports. All Nvidia 9xx series GPUs and newer ones, as well as all AMD cards from 2016 and after, include an HDMI 2.0 slot as a standard.

With regards to your display, you’ll want to make sure it can handle HDR video as well. The resolution of HDR-compatible screens must be at least Full HD 1080p.

Two 4K displays that support HDR10 content are the ViewSonic VP3268-4K and VP2785-4K. Color accuracy is frequently considered in these monitors to assure that on-screen pictures are as authentic as possible.

Is HDR a worthwhile long-term investment?

It’s common knowledge that technology is always evolving [for the best].

High-definition televisions, for instance, did not become available in the United States until 1998 and were not widely used for another five to eight years. However, Full HD quality is now widely available across the country, with 4K UHD serving as a novel alternative.

VHS tapes evolved into DVDs, and finally Blue-Rays. Vinyl records became CDs, which eventually became mp3s, just as they did in the music industry.

In respect of televisual resolution, 480p evolved through time into 720p and 1080p. This graphic depicts how rapidly technology has transformed and simplified daily life.

The ongoing fight between HDR and SDR reflects the same trend. Even while HDR has been popular in photography for a while, it is still a relative newbie when it comes to televisions and displays. Some even claim that 1080p HDR is superior to 4K SDR!

Now that you have understood how HDR might change the game, you’re probably considering a dive to HDR, so

Is HDR a good investment? Will High Dynamic Range technology take off?

HDR technology is a solid bet for all of its advantages. Currently, the underlying hardware is inextricably tied to ultra-high definition resolution, often known as 4K.

Given the ease and speed with which 4K is being adopted by the wider populace, it’s safe to assume that HDR will follow suit in the coming years. We may argue about HDR vs.

SDR all day, but whether HDR is useful to you depends heavily on your viewpoint. For the time being, you may look through ViewSonic’s HDR-compatible ColorPro monitors or learn more about color calibration and grading.

HDR devices are not uncommon to come by, which is good news for early investors. HDR benefits gaming as well, allowing you to see more depth in your games for a more enjoyable environment.

For additional information on gaming displays with HDR, check out the ViewSonic XG3220 and XG3240C game monitors.

We believe this has provided you with some much-needed clarification on HDR displays and how they’re altering the display market overall.

To summarize, we are fans of these HDR screens, and if you have made it this far, you are a supporter as well.

what does wsg mean on snapchat